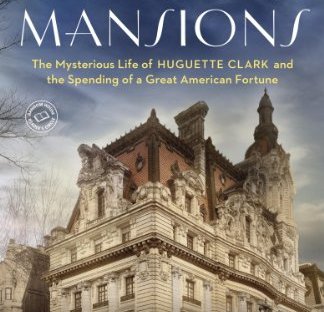 From the second sentence, I was hooked. A guy who starts off house hunting and stumbles on a castle owned by a woman so reclusive few have ever spoken to her. A woman who rubbed elbows with some of our Nation’s own royalty. A woman wealthy almost beyond comprehension, who seemed to have it all on paper, and yet didn’t. A woman who’s life seemed sad to me. So sad, that I wouldn’t wish her personal story onto anyone I know. Her name, Huguette Clark. Huguette who? Yah, that’s what I thought at first too. I had no idea who she was or why her story would resonate with me.

Huguette Clark is the younger daughter of copper baron, Warren Andrews (W.A.) Clark and his second wife Anna Eugenia LaChapelle Clark His former ward who was almost 40 years his junior. From all documentation Dedham was able to source, she was a reserved child who in temperament is described as quiet, artistic, and an introvert. All the wealth and comforts her father could provide couldn’t change the tragic death of her sister, Louise Amelia Andree when Huguette was a young teen. After her sister’s death, descriptions of Huguette change slightly. She becomes more withdrawn, more introverted and from what I can tell, depressed. She married at the age of 22 and divorced nine months later. She claimed desertion while he claimed non-consummation. Her father died in 1925, from then on Huguette lived with her mother until Anna passed away in 1963. From that moment on, Huguette truly became a recluse. He life revolved around her art, her dolls and their accessories. Few spoke to her and even fewer ever saw her.

Fast forward to 1986. A frail woman, face covered with a scarf in the hopes of maintaining some of her coveted privacy, is carried over the heads of several paramedics and into a waiting ambulance on the orders of a Doctor. Although they would all be maintained to impeccable standards, she would never see any of her homes again. She spent almost 20 years in a hospital, fearing the outside world. Upon her death in 2011 at 104 years old, she left an estate worth more than $300 million to her attorney, accountant, caretaker and charity. Her distant family fought her last will and testament, citing elder abuse and fraud at the hands of those persons who benefited from her fortune.

Was Huguette Clark taken advantage of by her attorney, accountant and primary caretaker? Should something have been done to protect her from giving away millions to those who could have manipulated her? Should her distant family, with whom she had next to no relationship with have inherited it all? Was her judgement compromised as she aged? Or did Huguette in fact make choices to use her vast wealth to insulate herself from the tragedies which seemed to plague her life. This fascinating and compelling narrative drives home the adage that money doesn’t buy happiness.