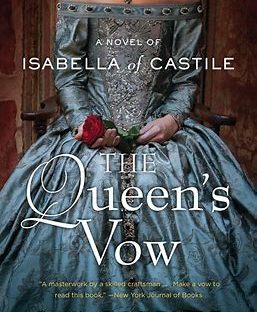 I was really excited to read this after reading The Last Queen, Gortner’s novel about Queen Juana the last queen of Castile. Gortner’s knowledge of how the Spanish court operated during that time, its policies and traditions woven into a story about the life and reign of Queen Isabella, yes please!

Sadly, my exuberance for the novel only lasted until about page 90.

The novel started out well. The writing had a way of making me feel as if I was a person right there at the center of the court. As Isabella’s life shifted from a background figure in the line of succession to heiress presumptive, there was a shift in how the story was told as well. I felt that rather than showing me as a reader what was happening in the story, Gortner told his reader what was happening. Isabella went here, did this then she went here and did this seemed to be how the remainder of the novel progressed. Entirely absent was the feeling I look for of being in the middle of the story as it happens. This novel, for me, was rather dry despite knowing as an avid reader of historical fiction, what a tremulous, exciting and turbulent period in time this was for not only most of Europe but what is now modern Spain. Historically, the countries of Aragon and Castile were at a rich and fascinating point in time. There is so much that could have been done to describe the culture, religion, court life and turmoil which existed and it makes me disappointed to find so little of it in The Queen’s Vow.

It wasn’t just the lackluster backdrop which bothered me. There could have been a lot more done to bring to life Queen Isabella’s personality and character. I felt she went from town to town in an almost nomadic existence, void of any real connection to the masses of subjects who adored and also feared her. I also felt she had a lack of appreciation for those who had helped her become Queen. There was almost next to nothing I could use to make an emotional connection with Isabella during two thirds of the novel. She claimed passion for her people in one breath and in another issued orders for their slaughter. I didn’t understand her choices.

All in all, I wished for so much more than what I got as a reader.