In the beginning of The Other Queen, Philippa Gregory writes, “Every woman should marry for her own advantage since her husband will represent her, as visible as her front door, for the rest of her life. If she chooses a wastrel she will be avoided by all her neighbors as a poor woman; catch a Duke and she will be Your Grace, and everyone will be her friend. She can be pious, she can be learned, she can be witty and wise and beautiful, but if she is married to a fool she will be ‘that poor Mrs. Fool’ until the day she dies.” It is a sad foreshadowing of things to come.

Told in three voices over several years of time from 1568 through 1572 The Other Queen leads us as readers through the imprisonment of Mary Queen of Scots in England. Bess Countess of Shrewsbury, is portrayed as a resilient and resourceful woman. Her views are by far the most modern and business minded. Her husband, George, The Earl is a royalst and his loyalty to Elizabeth, Queen of England is put to the test. Her Majesty Mary, Queen of Scotland is the third voice in Gregory’s novel. A woman who believes her imprisonment to be unjustified and unlawful stops are next to nothing to gain her freedom.

Overall the book wasn’t bad, and it wasn’t great. Gregory has certainly written better books in my opinion. With this she seemed to be stuck in a rut. The Other Queen is very reminiscent of The Boleyn Inheritance, which in my not so humble opinion, is much better. To me it seems like Gregory followed the same format as The Boleyn Inheritance and really rushed through the writing of this book.

I found the character development to be rather flat. Bess is entirely more modern in her thinking than she really should be. While historically, evidence suggests she was a forward thinking woman, in The Other Queen the boundary is pushed entirely too far for my liking making her unbelievable in relation to the other characters. She is in charge of managing her former husband’s extensive properties and sees herself quite clearly as a woman of worth. While it wasn’t uncommon for a woman to manage household affairs, to manage accounts in her own right certainly was. While Bess winds up with her independence and fortune intact, George is shown to be exactly what she fears having for a husband, a fool.

Her husband, the Earl (George) is a complete and utter fool who clings onto the old way of aristocratic living well beyond how any real person would behave. He has no concept of how his vast estates are managed or how much money he has. Everything is a huge mess with no clear accounting for outgoing or incoming expenses. It shocks me he lasted as long managing his estates as he did.

Also, as a married woman, I would not have put up with half of the crap he puts his wife, Bess through. He takes her completely and totally for granted almost from the beginning. While this lends to a certain amount of realism as far as what a woman’s worth and duties were in that time, it doesn’t make him likable in any way. It would be a very cold day for my marriage for me to haul all of our possessions halfway across the country to find my husband having not helped one bit entertaining another woman. I wouldn’t care if she were a queen or pauper, or a pauper queen. That would not fly well between us at all.

Mary Queen of Scots is portrayed as a devious, sneaky and altogether unlikable character. For the life of me I don’t understand why the Earl gave everything he had to her over and over again. A person’s physical beauty will only get them so far with people. She constantly plots against not only Queen Elizabeth but against her captors. In that respect her conduct is understandable, I wouldn’t want to be held captive for decades either, nor would I pay out of my own pocket to be held captive without any charges being brought against me in a fair trial. But neither would I ruin a person for spite as she does to many. 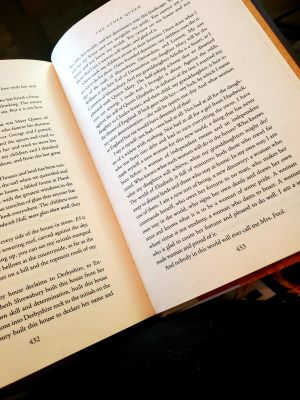 Ultimately, I will probably not read The Other Queen again. There are too many new books as well as old favorites to pick up a book so lackluster.